There’s no question, cannabis legalization is creating a flurry of activity in the tech sector. As the acceptance for cannabis consumption continues to increase, many companies are in a race to improve the way we consume cannabis.

Before becoming a freelance cannabis reporter, I spent twenty years working in technology, specifically in mobile technology. For many years, companies like Verizon, AT&T, Blackberry, and Motorola, would send me the first release of their newest device to test and provide feedback. Reviewing technology is second nature to me.

Since entering the cannabis industry in 2016, my love for technology hasn’t waned, and I’ve owned dozens of gadgets for consuming various forms of cannabis. Today, as the Editorial Director for CannabisTech.com, I’ve transitioned my experience from the tech world into my writing career in the cannabis universe.

Through my experience working in Denver cannabis dispensaries, and as a professional tech-geek, I have tried many gadgets, including wax pens, flower vaping devices, electronic dab straws, and proprietary cartridge systems. And they all have one thing in common — they were cool for about 15 minutes. Right now… ALL of those devices are shoved in the back of a desk drawer somewhere.

All but one. My GPen Connect.

The Problems with Dabbing

Now, let’s be clear here; I am not talking about a silly dance move. Dabbing is a method of cannabis consumption that delivers a highly concentrated dose of cannabinoids quickly and efficiently to the lungs. The concept is similar to vaping, but with a more manual process.

Traditional dabbing methods involve a torch and some kind of smoking device:

· A Bong with a Glass Dab Bucket or Titanium Nail: The dab bucket or nail is heated with a torch until its glowing red, and the cannabis concentrate, such as shatter, wax, or live resin is dropped into the bucket and vaporized.

· A Dab Straw (Nectar Collector): In this case, the smoking device is a glass or titanium straw that is heated with a torch, and “dabbed” into the cannabis concentrate dish while the consumer inhales from the other end.

· E-Nails: A relatively new way to heat your dab bucket or titanium nail, these electric devices plug into an outlet and heat a metal coil, which in turn, heats the bucket or nail.

Obviously, using a torch is often a factor that causes many people to raise an eyebrow. In fact, we once hosted someone who had to leave the room when we did dabs because firing up the torch brought on flashbacks from his past experience as a crack user.

Other drawbacks from traditional methods of dabbing include:

· Very little temperature control can often result in “hot dabs,” which are hard on the lungs and can create unwanted toxins. Some compounds can actually become carcinogens with too much heat.

· Buckets are hard to keep clean, they get charred, can break easily, and will remain hot for several minutes — which can result in accidental burns.

· Often, titanium nails, aren’t titanium at all — inhaling certain metals can be toxic. Titanium also stays hot, increasing the chance of a burn.

· Torches are a fire hazard that can result in disastrous accidents.

· E-nails have a cord that creates a hazard — I have heard of several bongs being yanked off the counter as someone trips over the e-nail cord. I have also heard stories of e-nail burns because they stay hot.

Yet, as I type this, my GPen Connect is charging right beside me. Although I received this new piece of tech more than six months ago, this is the one cannabis device that I still use every single day. It is the only piece of cannabis consumer tech that has truly impressed me in every category.

It comes in four pieces and can be used on any bong or dab rig:

· The Ceramic Compartment — a moderately sized ceramic burner that produces clean, smooth, great-tasting vapor. The compartment screws into the top of the body and has a magnetic lid.

· The body — this segment connects everything together and provides an airflow valve for clearing the chamber.

· The battery — this supercharged, rechargeable battery connects magnetically to the side of the body to power and control the heat settings.

· The Glass Adapter — the adapter comes in multiple sizes to fit any dab rig or bong.

The GPen Connect is incredibly easy to use. The controls are very similar to most other devices with three temperature settings:

· Five clicks turns the device on and off.

· Once you have your temperature selected, load the cannabis concentrate into the ceramic compartment, replace the lid, then press the button twice. The light will flash while it heats the ceramic burner.

· When the light turns solid, inhale.

· When the light shuts off, press the button on the side to allow extra airflow to clear the chamber. 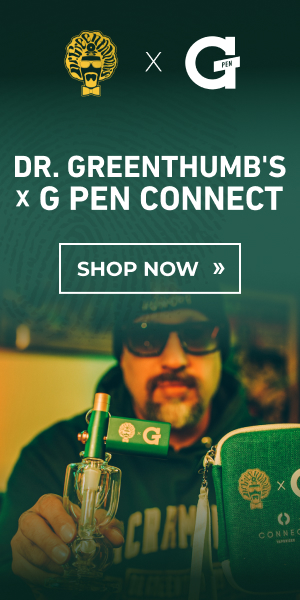 Some of the links in this post are affiliate links and if you make a purchase through them, I will earn a commission. Keep in mind that I link these companies and their products because of their quality and not because of the commission I receive from your purchases. The decision is yours, and whether or not you decide to buy something is completely up to you. Please see my full disclosure policy here.

Nobody likes an electronic that is complex to use, or always needs to be charged, and this is where I feel the GPen Connect truly excels. After fully charging my GPen, my husband and I were able to use it several times a day for five days before the battery died the first time. I was very impressed with how long it lasted. However, after six months of use, I will admit, we have to charge it about every other day now, so I do feel like the battery life is dwindling a bit. (But it still hits like a champ!)

But the most apparent benefits of the battery are the simple facts that it replaces the torch, and there’s no cord to risk snagging or tripping over!

Cleaning a gunked-up dab rig is tedious, but cleaning gunked-up electronic can be next to impossible. With the GPen Connect, all of the pieces, except for the battery, can be submerged in alcohol, so cleaning is super easy.

Soak in alcohol. Wipe clean with a dry cloth. Allow to dry overnight.

*Pro-tips: Allow the 24 hours for drying time, or your next dab will taste like Everclear. Order two ceramic burners — one to use while the other is drying.

Grenco Science didn’t just hit a home run with this device… they hit the ball out of the park. The GPen Connect solves all the problems associated with doing dabs and provides a safe, consistent dabbing experience every single time.

Stay informed and keep in touch!